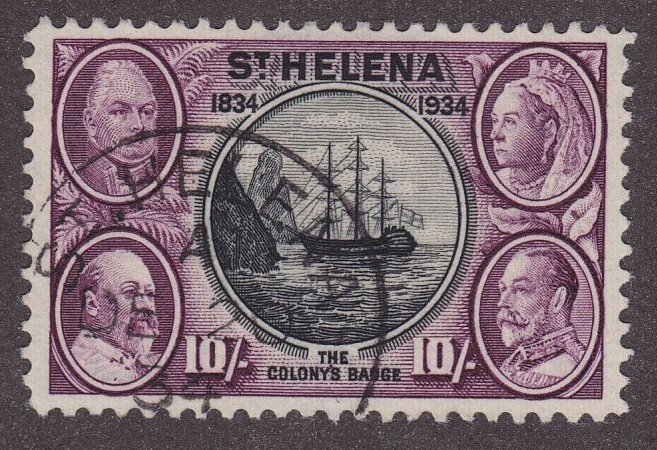 Prior to November 1, 1946, airmail rates from the US to points south of Mexico varied from 25c to 40c per 1/2 ounce, depending on the destination country . On November 1, 1946 the US Post Office dropped all airmail rates to points in the Western Hemisphere (except Canada, Mexico and Cuba, which were already lower) to 10c per 1/2 oz. This was an enormous rate drop and was worthy of promotion to the public. 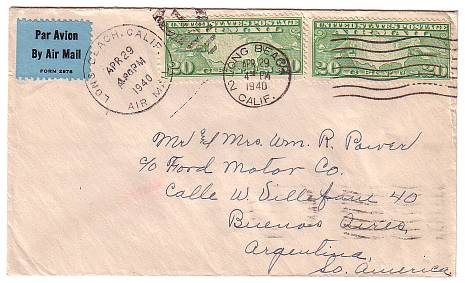 On Oct 23, the USPO issued a press bulletin announcing an opportunity for the public to test the speed and efficiency of the new, cheaper airmail service in cooperation with Pan Am Airways.

On one day only, November 1, 1946, collectors and other interested parties were invited to send covers to the Pan Am offices in 28 Latin American and Caribbean cities at the new 10c rate which took effect that day. Officials in the various Pan Am offices would mark the date the covers were received (generally with a dated handstamp), apply local postage to the front of the cover (at Pan Am's expense), mark the cover "Return to Sender" and hand the cover back to the local post office for airmail transmission back to the sender in the United States.

This was an opportunity for the sender to receive documented proof of the rapid turn-around time for airmail service, and marked a milestone in the rapid development in post-war air transport. Not everybody was happy, though. The philatelic press complained that the Post Office's notice was so short that their readers would find out about the event only after it occurred. I searched the weekly stamp column of the New York Times for the months of October and November 1946 and could find no mention of the event at all.

The Pan Am offices were instructed as follows:
1) Mark the cover "Return to Sender"
2) Draw a line through the address
3) Place proper airmail postage on the front lower left of the cover. 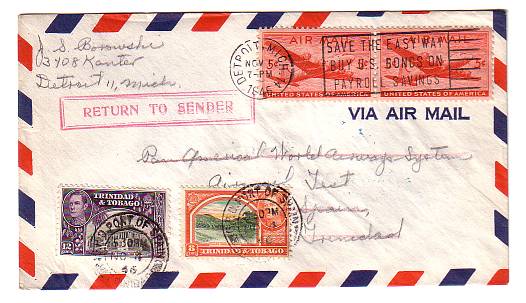 4) Stamp the back of the envelope with the date it was received in your office.
5) Return to the local post office

A total of 28 cities were involved in the test:
(click on any link to see a picture of a cover)


Most people who have these covers have no idea what they are. Every time I have bought them from dealers at stamp shows, I have innocently asked, "Can you tell me the story behind these?". Not once have I received a coherent story.

I have accumulated these for 3 years, buying any I found at a reasonable price. I have accumulated only 75 covers, managing to put together only one complete set. Some cities seem to be scarcer than others. They are not rare. One probably should not even call them "scarce", but they are very much underappreciated. Nearly all my covers were acquired at prices of US$3 - $5, however I have seen them offered as high as $50 by dealers who had a complete misconception of what they are. Frequently, they will be found in sets, created by one sender. I have never found one of these sets to include all 28 cities. Should these covers ever find a following, I believe any available supply will be soaked up in very short order, with inevitably much higher prices.

A word of warning: Only the 28 cities listed were actually involved in the test. I have seen lots of these offered in auction catalogs that included destinations like the Falkland Islands. These were just wishful thinking by the sender. Naturally, the cover was returned, and got the "Return to Sender" marking, but not the handlng by Pan Am, nor the return postage paid.

If you are looking for interesting collectibles of the post-war boom in air transport, the challenge of acquiring a complete set of these covers is a good place to start!

The author would like to hear from anyone with original literature about this System Test -- US Post Office press release, stamp publications of the time, etc. Please contact him at roy@lingens.com