The 13 Stamps of Nova Scotia
A Brief History

Nova Scotia is located on the Eastern Coast of Canada between the Gulf of St. Lawrence and the Atlantic Ocean.  Prior to joining the Canadian Confederation in 1867 it was a British Crown Colony.

The first Nova Scotia postal stamp has the image of Queen Victoria in the center. 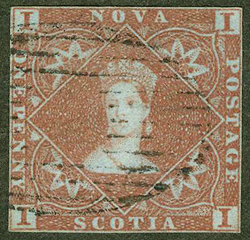 The second and third issues were 3 pence and differed by their blue color.

Crown of the Great Britain Heraldic Flowers of the Empire 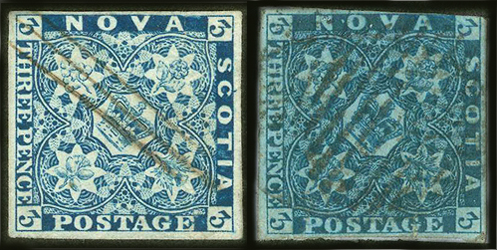 The fourth and fifth issues were 6 pence.

They differed by their green color also but the darker issue is far more valuable.

All the above issues were unwatermarked, imperf, and on bluish paper.

They were perf 12 on white or yellowish paper.

The stamps of Nova Scotia were replaced by Canadian Postage in 1867-68.